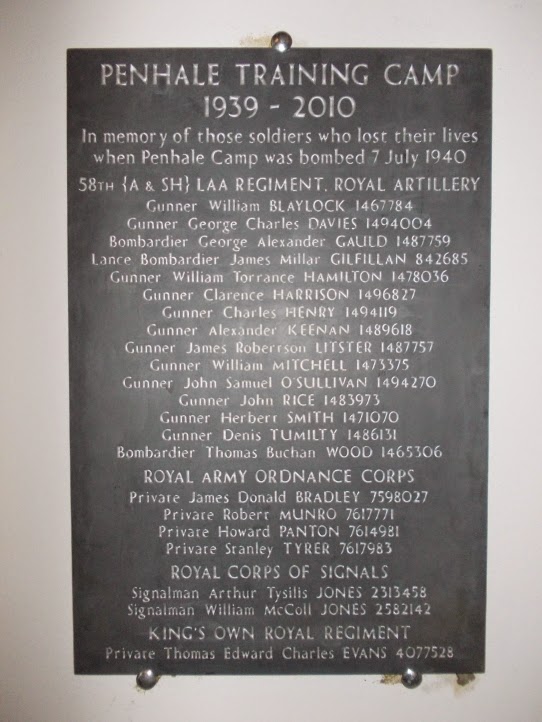 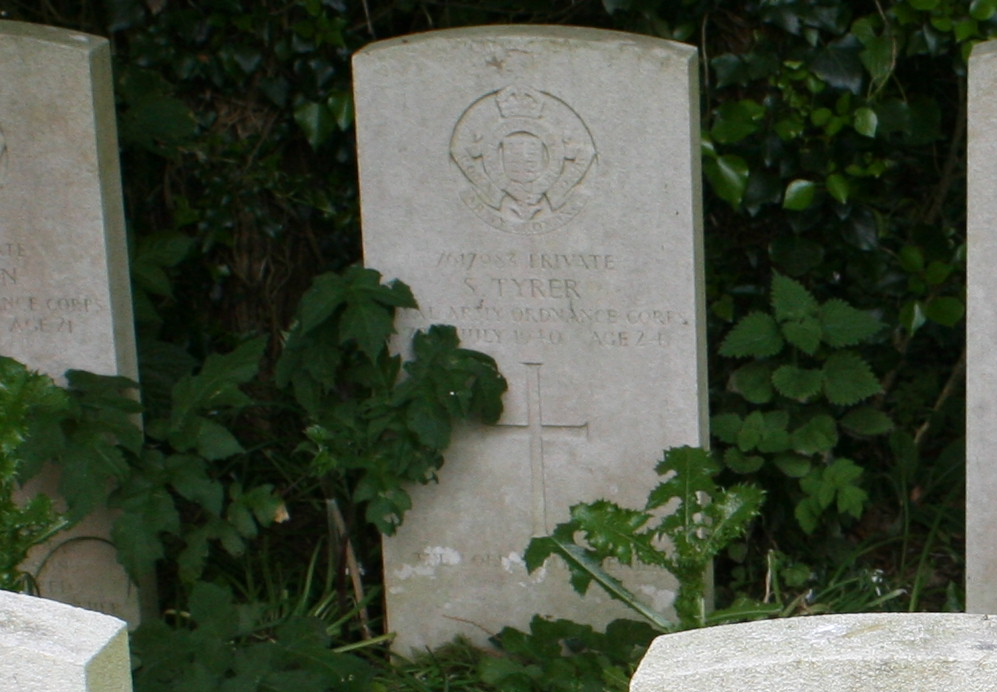 Private Stanley Tyrer , one of the Penhale 22, his official war grave.

On a quid pro pro basis, I just thought I'd publish a quickie. For legal reasons of course.

Well, Andrea enjoys reading blogs apparently. Thanks for that Andrea. Was that encouragement? The smiley and the kisses though... No thanks dear. 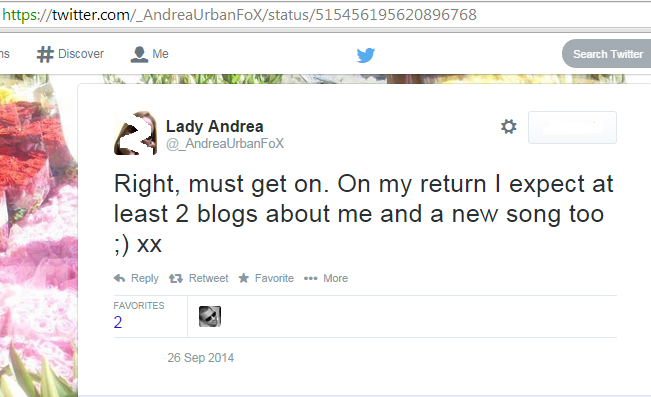 Actually, this blog is in the interests of truth.


She was made to look foolish (and all that is backed up Andrea, just like my blog) which isn't difficult:

So, she decided to do a bit of baiting and trolling of a Muslim woman,  though being crafty she didn't link by @ the person she was trying to set her followers on to, oh no, she linked by URL to a tweet. This is a ploy she often uses, as her nasty tweet will appear in the mentions of the person being attacked, then she will claim the person responding is spamming her.  Tiresome troll she is.  I may blog more on this later.

Andrea - who thinks all Muslims are not to be respected... that's right, NO Muslims deserve respect, I presume even those who look after sprog while Andrea is having her nails fixed, trolling, producing what must be the most tedious Storifies ever, and spewing her anger and bile - also thinks it's fine to disrespect Britain's war dead. Bet her Libertarian pals are proud of her! 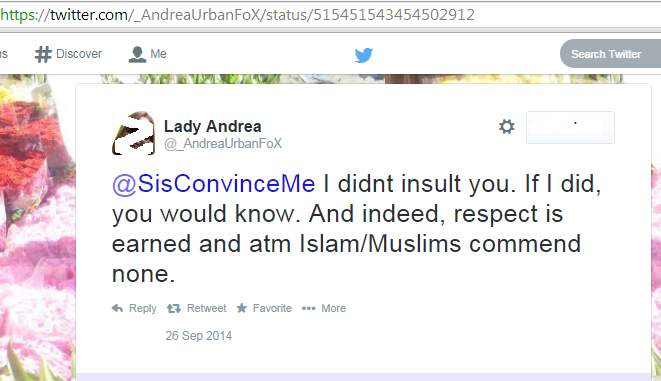 Being insulted by keyboard warrior Andrea is akin to being savaged by a spotty thirteen year old in a strop, she'll call you  c*nt and then tell all her pals how witty she is. Pats on the head Andrea! Here's a sample (Andrea doesn't understand irony): 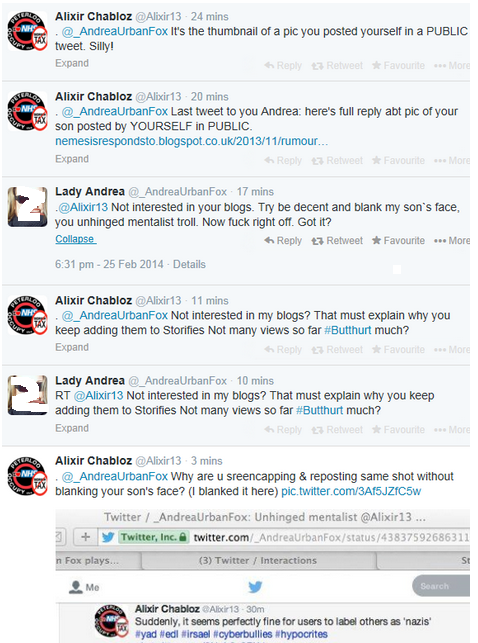 I'm reminded of  Pride and Prejudice. Andrea has the wit of Mrs Bennet (ref Mr Darcy). 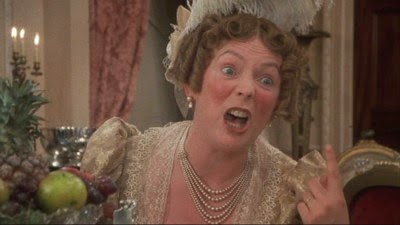 Sicko Andrea, desperate to smear Alison Chabloz as an antiSemite  (Andrea and troll pals are very simplistic in outlook, Andrea once claimed on Twitter I support MAC and Islamists... oh my aching sides) has stooped to the depths of smearing Alison's grandfather, in one of her angry and repetitive  Storifies:

A deserter's camp?  Really? Penhale? I'm sure the relatives of all those who were killed at that army camp will be delighted to be told that Andrea Da Silva Goncalves believes they were in a deserter's camp.

Andrea, Alison's grandfather was called Stanley.  He was never called Stan. And that is Mr Tyrer to you, you disrespectful oaf. In fact, better not speak of him at all, if this is how you disrespect Britain's war dead.

He was killed in an army camp on UK soil at the age of 24, after escaping from the bloodbath of  Dunkirk.
http://en.wikipedia.org/wiki/Dunkirk_evacuation

In July 1940, 22 men from the 58th Light Anti-Aircraft Regiment sent to recuperate at the camp a few weeks after surviving the German attack during the evacuation of Dunkirk were killed after a lone German plane dropped four bombs on the camp.Read more: http://www.westbriton.co.uk/final-farewell-Penhale-bomb-victims/story-11479593-detail/story.html#ixzz3EXwWljm0

What did your family do to fight the nazis Andrea?

I gather you have no idea at all of the history of those killed at Penhale, of whom Stanley Tyrer was one.   I suggest before you make any bigger a fool of yourself you do a little reading.

Oh he's also buried in an official war grave in a C of E churchyard in Cornwall, along with others. I think you'll find deserters were not so honoured.

July 7 1940, Penhale Army Camp, Perranporth, Cornwall. It was a sunny, Sunday afternoon.
Only a few memories are left; army documents and old letters. In all, 22 dead, among the first military personnel of WW2 to be killed on British soil.
Death notices appeared in local newspapers mourning the loss of the Penhale 22 but no details were given about how or where they died, just that they were killed as a result of ‘enemy action, somewhere in England’.
My Grandfather, Private Stanley Tyrer of the Royal Army Ordinance Corps was a driver. After 90 days training, he had disembarked from Southampton on March 19, arriving in France the next day to start his service...

...Other letters speak of his escape from Dunkirk; going without food for 48 hours, sleeping in barns and under bridges before finding the docks and passage back to Harwich.
Before being transferred to Penhale, my Grandfather had been sent to Chisledon Camp near Swindon which was used as a collection point for men returning from the evacuation of Dunkirk...

On that gloriously sunny afternoon in July, 1940, there was apparently a poker match going on in the mess. It was Stanley’s 200th day of service. The men had no time to hear the engines of the low-flying Luftwaffe bomber’s engines as it released four bombs, three exploding immediately, killing 19 men on the spot. Three others died from their wounds within the next two or three days.
At least one next of kin wasn’t informed in enough time to request the body of their loved one to be sent home. In fact, the 19 men who were killed at the camp were all buried in the churchyard at the local Norman parish church of Perranzabuloe, St Piran’s, within just four days on July 11.
The news was hushed up for reasons of safeguarding national morale. There were no photos, no radio reports, no national news stories, no statement by the War Office...

A new plaque with the victims’ names has now been erected at St Piran’s church. 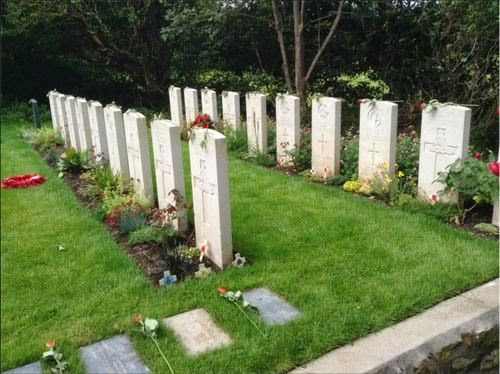 The European War Graves Commission recently provided a grant for improvements of the Penhale19 war graves at St Piran’s, Perranzabuloe

Of all the sicko trolling, the lies and smears made by Andrea Lying Toad, to claim the Penhale 22 were deserters is probably the lowest yet.

I'm wondering what the Church Of England, in whose burial ground these men lie and in whose church in Cornwall their memorial tablet is, thinks of its recent convert to the Religion of Peace (and Goodwill to All Men)? 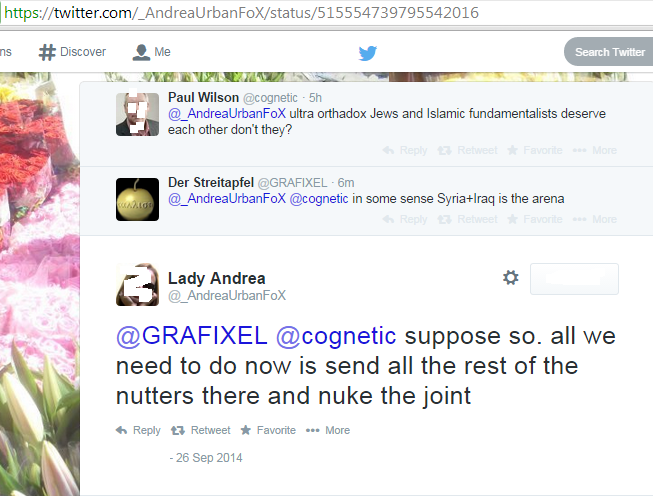 When it's Armistice Day, when Britain remembers with sadness those killed in armed conflicts (my relatives amongst them) Andrea, don't bother digging out that poppy avatar again.  This nation is ashamed of people like you.  Keep your faux parading of respect, and stick it where the sun don't shine.